No, no, I didn't drink too much; I rarely drink alcohol anyway to be honest .
It's just a way to show off some of the recent conversions I did.

Maybe I need to explain why I'm doing this:
When I decided to do a Rangers of Shadow Deep project in 15mm, I checked what I had already laying around. Turned out I had quite a bit of monsters and villains, most meant for sci-fi or 28mm, and barely any heroes. To remedy this I bought some adventurer packs from Alternative Armies. I
have to admit, it got a little bit out of hand after this first order. G
through my order,  I noticed a few doubles and many models with a similar role.
Quite a few Men-at-arms, enough Wizards to start a council and the beginnings of a decent Thieves Guild but no archers or models suitable to be used as rangers.
And like I already mentioned in my previous post, I really like to have two of every follower.
So, in order to get myself all the companions I needed, I knew I had to do a few conversions.

Now, the best conversions are the ones where it's almost impossible to spot the original from the one you changed. I'm far from that level but I'm still quite pleased with how some turned out and I feel like I did a decent job. Some are better than others, but that's just the way it is.
One word of warning though, a few of the models are a lot smaller than others. Many are close to 18mm, but others are actually closer to 15mm (barely). Which means you can paint eyes on some but it's near impossible to do on others.

First up are a Tracker and an Arcanist, both started out as some kind of Druid. Strange enough he was carrying around a shield which didn't like, so I removed the arm holding it on both of them and gave my Tracker a bow. The Arcanist also got a headswap with a head I removed from a Blighthaven Southern Death Cult model. As I noticed a severe shortage of female characters among my companions, I also gave the model a sex change. The book, made from some leftover putty, didn't work out as I wanted but decided to keep it anyway. 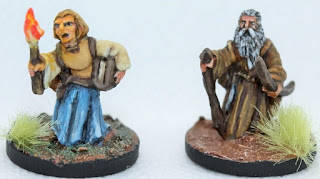 Second is a Men-at-Arms and his converted Guardsman version. The idea was to give him and helbard, only after glueing on the blade I noticed how overly large it was and changed it into an axe. After all, the description of the weapon only says: "Two-handed weapon", so it could be anything from a spear to a helbard or a large axe. These guys are pretty small compared to the rest which is why they look a bit wonky ;-). 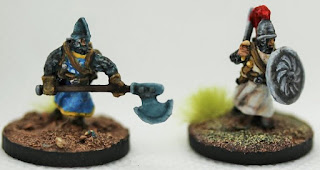 The Templar on the left was the most extensive conversion I did on a 15mm model so far as I had to remove large parts of the Knight's body to change it. I cut the head from one of the models with the winged helmet (I got three of those) and put this in place. The arm holding the spear is a bit long but it doesn't really bother me that much. 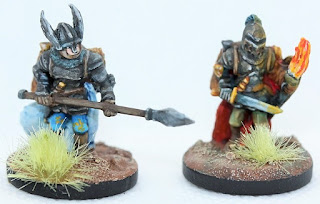 That's it for this time, thank you for reading!
Posted by Wouter at 13:29