it's been a while since I last posted anything. Again, I can offer you plenty of excuses but in I'm not going to do that. I got a bit depressed because my job hunt is going poorly and immersed myself in Persona 5 to keep my mind from wandering.
However, October is usually a month many painters use to paint in a kind of theme (Zomtober being a regular one). With the Halloween spirit in mind (not that I care about the holiday though) I started painting some creatures that are often considered creepy, disturbing or spooky after I got back from a family holiday in Western Australia.


While I still even haven't got an interview in sight, even though I’ve send over a 100 resumes already, I got the painting bug again so I'll hopefully feel well enough to post more regularly in the coming weeks.

First up are a bunch of spiders I bought off from eBay. Given the price I paid for them I suspect they're recasts; the details are pretty good though but the resin's a bit brittle and a few legs broke off during transport.
Their size is similar to that of a medium sized animal, not too big or too small and close to what I was looking for. 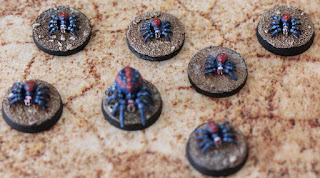 Next is a converted Reaper Bones fire elemental, which I'm going to use as a tortured soul for the Rangers of Shadow Deep game. 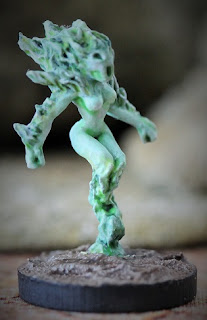 A couple of skeletons and skeleton knights from Alternative Armies. I removed the turban on one of them as I thought it looked ridiculous, my repair work isn’t the best on him however and he looks a bit weird (you can probably spot him right away). There were a few more skeletons in the pack I bought, but these are wearing some more outlandish armour so I’m saving them as summons for my Burning Sands collection. 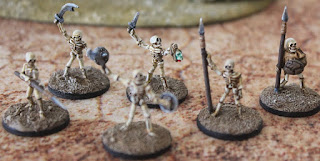 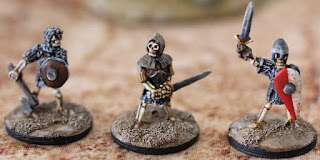 And finally a trio of Blood Bats from the Warhammer Vampire Bat Swarm range, especially the two smaller ones are great for 15mm.

After painting all of these I felt like doing more, so hopefully it won't be too long until my next update. Thank you for reading!