Hello Everyone,
Last month I've been going back and forth between my fantasy and sci-fi projects.
My backlog of partially painted models is slinking at last, although there's still plenty of models left to do. Among them are quite a few more stand-alone mercenary type looking models.
Not sure if I'm going to use them for games or not, we'll see.
Khurasan has a lot of great models, very crisp and with clear details, this guy is no different.
He is probably going to end up as a pilot of sorts, hence his high visibility clothing. Pretty happy with how he turned out. 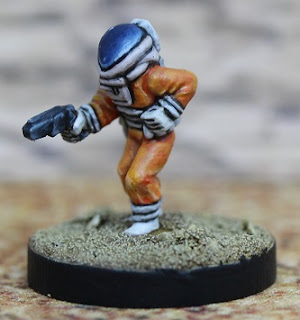 Really like the look of the model, he's a bit like a crossover between steampunk and post apocalypse.
One of the best models from Alternative Armies in my collection imho. 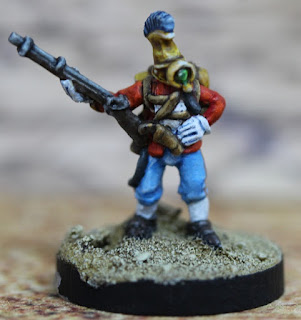 Another Critical Mass mercenary model, didn't like the original bright green scheme I did on him and decided to repaint him almost entirely. 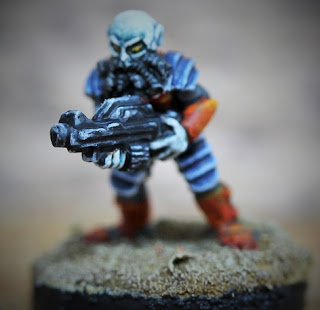 Not really satisfied with this guy, I'm not even sure the colour combination works to be honest. I should have gone with my gut feeling and give him dark grey armour. Maybe I'll buy him a second time and try to do him justice. 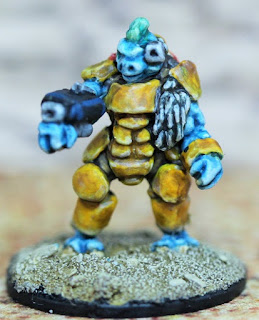 This Yoda is a Micro machines model. Like I said before he's a bit on the large side, but still only 12mm high. 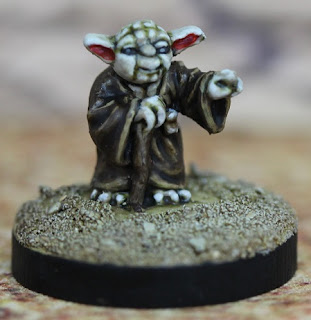 Every story needs some antagonists and evil robots are a bit of a trope. Figures are from the scene and Khurasan.

A damsel in distress, or perhaps that's what she wants you to think before she robs you. Lucy will probably join my gang of zombie survivors once I get to them.
She's been in my box for so long she's started to suffer a bit from leadrot (for some reason GZG figures seem more prone to this). Fingers crossed I managed to stop it and my paintjob will protect the model from deteriorating further. 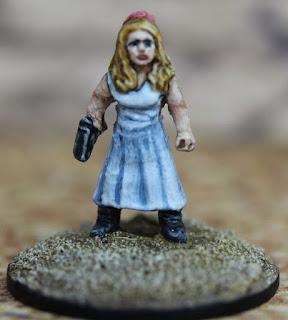 As promised, some reference to show the size of the models, measured from the top of the base. Most 15mm models have a slab to mount them on a base, which isn't taking into the measurement. 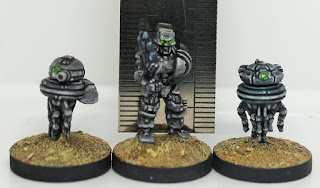 Thank you all so much for watching, 'til next time!
It will take me a bit longer to work towards my next post, hopefully next week or so.
Wouter
Posted by Wouter at 09:23